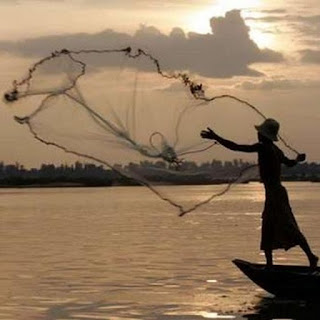 Recently, a walk-in customer commented that he loved coming in to our store because it reminded him of a fishing-supply store...lots of gear and little tools.

It reminded me of something Michael Cardew had said about the creative process..."It's as if you are fishing for big, mysterious fish. You have to be careful what your net is made of and how you set it out. So, in your art, you ask yourself, if I go about it in this way...am I going to catch the fish?"

Sometimes you might catch a good painting. Other times, your catch might be a new effect, skill or technique. But, if you're painting on location, in the moment, on-the-spot, you're practically assured that you will come away with a heightened awareness and something brand new and fresh.
Posted by lady guerrilla painter at 4:48 PM No comments: 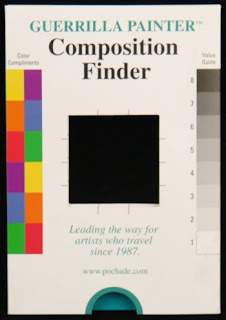 Sometimes people wonder about the little charts & diagrams on the Guerrilla Painter Composition Finder. Here are some explanations:
The Golden Section and Fibonacci Spiral
Leonardo Pisano Fibonacci was a 13th century mathematician, who is known, among many other things, for the Golden Section and Fibonacci Spiral. These are closely related mathematically to familiar forms in nature, such as the arrangement of flower petals, seed-heads and pine cones, the shell of the chambered nautilus, on up to hurricanes and galaxies.
Color Complements
On the front of the Composition Finder™ is a simple color complement guide, which can be a useful reminder when mixing grays and browns. The colors are not exactly accurate, particularly the purple complement of yellow. Many painters, however, find this slightly reddish purple more useful in mixtures with yellow than its true complement, which is more bluish.
The Golden Section describes a rectangle of particularly pleasing proportions, with sides having a ratio of 1 to 1.618. Examples of the use of similar proportions are found throughout art and architecture from the most ancient times to the modern. From the Renaissance on, many painters have used the Golden Section to create compositions and locate focal points within those compositions.
The “Golden Intersection”
On the back of the Composition Finder™ is an illustration of the Golden Section and Fibonacci Spiral. Painting sizes that approximate the Golden Section are indicated. The Golden “Intersection” (considered by some to be a promising focal point for a composition using the Golden Section) can be found where the horizontal and vertical lines connecting the diamonds intersect.
Trust Your Visual Intuition
Truisms to the contrary, there are no hard and fast rules that govern compositions. Good painters seem to break one or more of “the rules” as often as not. Consider throwing all the rules “out the window” of the Composition Finder™ and just trust your visual intuition. As you survey your subject through the Composition Finder™, you will see how the visual interest changes as you move it across the scene before you. With a little practice, you will know instinctively when you’ve found the best composition for you.
Posted by lady guerrilla painter at 11:13 AM No comments: 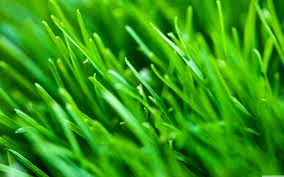 We recently watched a course about the effects of color. This is a topic that has actually been well researched, but I was a little disappointed that they didn't include orange or purple, and they didn't say anything about the various intensities. It was limited to black & white, red, yellow, blue and green. There are often conflicting effects, such as yellow indicating both happiness and caution, and blue symbolizing both friendliness and depression. One of the more interesting conclusions was that the color green enhanced creativity. The experiment involved asking people to come up with as many unconventional ways to use a brick as they could think of within a certain time limit, and the subjects who were given a folder with a green cover did consistently better than those whose folder was either white, blue or red. Maybe all we need to do is put our composition finder inside a bright green envelope, and we'll see lots more options for what to paint ;-)
Posted by lady guerrilla painter at 12:26 PM No comments:

"I had to re-think what I thought about landscape painting as a trivial pursuit. It's not trivial. The land, how we live on the land, how we relate to the land...it defines us." says Kally Thurman of Outskirts Gallery in Hope, Idaho, in this film entitled Extreme Plein Air. The entire 20-minute film can be seen here on Vimeo. It features artists Jaren Shear and Aaron Cordell Johnson. It also features close-ups of *real mountain goats* ;-)
Posted by lady guerrilla painter at 3:16 PM 2 comments:

This is your brain on plein air painting...

Earlier this week I had some errands to run in Denver, about 100 miles away. As I was driving home in stop-and-go traffic, feeling an impractical combination of tired and anxious at the same time, I happened to notice the sun coming through the clouds and landing in a bright patch on the foothills, which were green from the recent rains. I felt my brain relax and expand, and I took a breath. Ahhh, that's the bonus for a plein air painter...awareness beyond the ordinary. And you don't have to look far. There's usually something visually remarkable within reach. I came across this blog by a runner who is also a photographer, illustrating his various trails.
Posted by lady guerrilla painter at 1:49 PM 2 comments:

There is a helpful post at the Williamsburg Oils Blog about cleaning brushes without using solvents. People are becoming more aware about the toxicity of turpentine and mineral spirits. Even the low-odor type can be harmful if not used with plenty of ventilation.

The comments section also contains some good suggestions. After wiping your brush well on a rag or paper towel, you can use either Goop hand cleaner, baby oil or safflower oil from the grocery store to remove the residual paint. Then soap & water (regular bar soap or Murphy's Oil Soap) will finish the job. Maybe top it off with Master's or Winsor-Newton Brush Cleaner.

There is also a post by Larry Seiler on WetCanvas! where he describes how to melt down Ivory soap. He uses it as an inexpensive alternative for cleaning brushes in the classroom.

Of course, Gamblin Gamsol is a reasonably safe solvent, made from cosmetic grade petroleum distillate with all harmful aromatic solvents refined out of it, so it is minimally toxic whether inhaled, ingested or exposed to skin. It is good for thinning oil paints and mediums as well as cleanup.
Posted by lady guerrilla painter at 12:53 PM No comments:

I always thought that one of the best things that Art could do was to turn sadness into beauty. Alchemy. That kept me going for a long time, but as I start to get old I realize that everything beautiful eventually turns into sadness.

I sort of knew this all along, of course. Mark Twain told me so. But it's one thing to have someone (even a very wise man) tell you something, and another thing to experience it. Then I remembered the Navajo Beautyway chant:

In beauty may I walk

All day long may I walk

Through the returning seasons may I walk

...and I remembered that beauty is much larger, more powerful than anything in the human world.

With beauty before me may I walk

With beauty behind me may I walk

With beauty above me may I walk

With beauty all around me may I walk

In old age, wandering on a trail of beauty, lively, may I walk

In old age, wandering on a trail of beauty, living again, may I walk

Posted by lady guerrilla painter at 4:14 PM No comments: